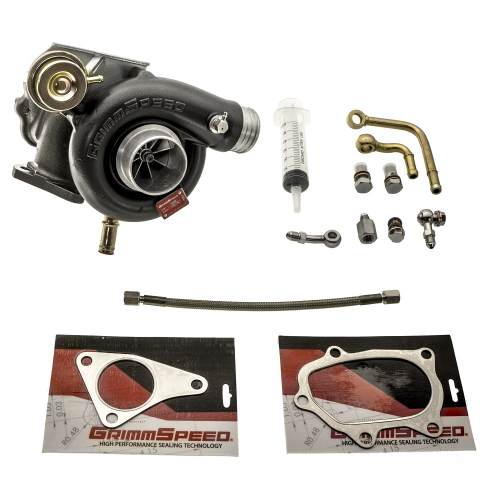 Description:
This is GrimmSpeed's new OVERTAKE BB500 Turbocharger and it is another powerful turbocharger designed by Chase Trogan who is a senior engineer at GrimmSpeed. The Overtake Ball-Bearing 500-Series Turbocharger takes the same formula as the GrimmSpeed CHASE JB400, but improves on the design with a faster spool, and increased airflow. This turbocharger features a larger 55lb compressor wheel, along with a massive 60mm turbine wheel. This will allow the engine to breathe easier at higher RPMs. By combining slick aero wheel designs and a dual ceramic ball-bearing center cartridge, GrimmSpeed was able to achieve a quicker spool when compared to the CHASE JB400 turbocharger by 150 RPMs.
The OVERTAKE BB500 will stay in the powerband after shifts and holds substantially more power when compared to the stock turbocharger to redline. It produces +129 horsepower and 109 ft/lbs of torque than a tuned stock STI turbocharger when research and testing had been performed on GrimmSpeed's STI on E85 with simple tuning and fuel modifications. Vehicles with cams, a built engine, and other major modifications will certainly see larger gains. This turbocharger is very competitively priced in the market when compared to other turbochargers in the same size and power category, and it is a direct mount fitment.