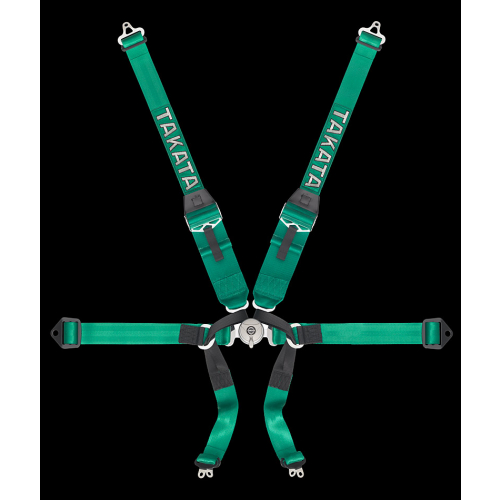 Description:
Takata RACE belts are manufactured by Takata Racing in Germany to the latest FIA standards. These 6 point belts feature 2" lap belts, and either 3" shoulder belts, or 3" to 2" HANS specific shoulder belts. The sub-strap uses Takata's compact T-Bar sub-strap. Both snap-on and bolt-on options are offered for mounting. Versions of the RACE 6 belts with 3" lap belts are also available with SFI certification.

Takata also offers 4 point RACE Series harnesses. Unique to these products is the feature of ASM (anti submarining mechanism) which is added to the right shoulder belt. ASM activates whenever an impact of a critical level occurs releasing and extra two inches of webbing on the right shoulder - allowing enough upper torso rotation and thus helping to reduce the likelihood of submarining. In additional unique bendable stainless steel mount bracket for the lap belts allow for easy installation to factory seat belt mounting points.

The FORMULA 6 HANS is a 6 point FIA approved harness for reclined or space limited seating positions as found in various formula cars, prototypes and kit cars. The routing of the crotch belts is through D-Rings on the lap belts so there is no hardware between the legs of the driver in the small confines of the cockpit.

The FORMULA 6 features an aluminum multi-point release cam-lock buckle, 2"/3" HANS shoulder belts, 2" lap belts and 2" crotch belts. The HANS specific 2"/3" shoulder belts are designed to make HANS use safer and more comfortable. The upper part of the shoulder belt is 2" wide, fitting perfectly on the friction surface of your HANS device. Standard 3" shoulder belts will work with HANS, but the 2"/3" belts give you a better fit and allow you to optimize the installation angles behind the seat.

The lap and crotch belts are supplied with wrap-in bolt on hardware which can also be removed for installation with pinch-plates as found in many formula type cars. The 2" shoulder belts have wrapped in bolt-on brackets, that can be removed, to allow the shoulder belts to be wrapped around a tube or bar.

Takata Quality - made by Takata Racing (Europe) in Germany